Description
platter, oval, in the Rococo style. This oval platter or meat dish features a heavy gauge rocaille cast finely chased gadrooned border with shell and acanthus foliage forms and shell handles. It has two pairs of engraved monograms to the rim, one within the Garter motto, the other within a ribbon tied oak and laurel leaf cartouche all below the Royal crown. The monograms are those of King William IV (1765-1837) and Queen Adelaide (1792-1849).

This platter forms part of an extensive service supplied by Rundell's to the Royal family, circa 1835. A large portion of the service, weighing 10,000 ounces in all, was sold at Christie's by William, 1st Earl of Londesborough in 1898. The service, consisting of 168 dinner plates, 30 soup plates, a circular breadbasket, four wine coolers, two pairs of soup tureens, six sauce tureens, and various meat and serving dishes, was variously engraved with both cyphers of William IV and the Queen, and just the Queen's cypher. 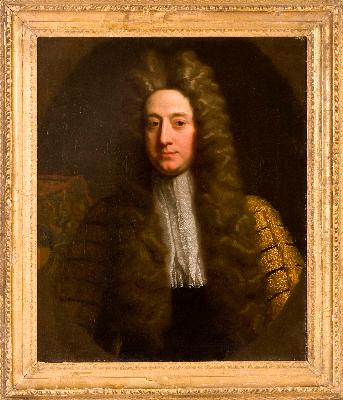